In my last post I told myself “not to overdo” it. Sadly exactly this happened. I have lots of trouble with shin splints (medial). 🙁

The last long run, which went well was on 19th August. Previously I was running over 30km multiple times on the weekend. Obviously this was too much. I ended up with painful shin splints in both legs. Normally these are a result of overstress.

Due to the pain in both legs I could not continue with my training plan. In the beginning after the pain occurred for the first time, I was trying to continue with shorter trainings. At some point I had to stop the running at all.

Of course I went to a doctor, got physical therapy and insoles. Meanwhile I do not have pain during normal walks and while climbing stairs like I had in the beginning. But after having a slow first training yesterday, again I had to suffer from pain in the well known spots in both legs.

How to deal with it?

Having some free time due to lack of training, I could rethink my training plan, analyze my running style and adjust my goals.

First thing was to realize that my old training plan was not sustainable. There were too many long runs over 30km on the weekends. Cross checking my plan with those suggested by Herbert Stefny, I conclude that they would not have been necessary.

Furthermore the goal to do the first marathon in under 4h maybe was too much. Although I did not train a lot for speed, this goal probably contributed to having an exaggerated training schedule which did not fit to my physical situation.

While getting the insoles and talking to the very nice people at long distance in Berlin, I was introduced to ways how to improve my running style. Paying attention to this during the runs was more easy than I thought in the first place. Slightly twisting my right foot and placing my feet besides each other instead of in a row helped a lot to reduce the pain.

Also I got some information about barefoot running and I will try it out to see if it strengthens my feet to lead to a more natural and healthy running style.

Finally I had to readjust my goals. I would love to run the marathon in Frankfurt. Reasonably without having a finishing time in mind now. Just being able to finish it at all would be great. Considering all the pain and how long lasting this seems to be, it’s hard to guess if I can manage to do so. Apparently the best thing to do right now, is pausing the training. Every athlete will understand, this does not feel like a good preparation for a competition. If I cannot make it to the race in Frankfurt in about one month: There are other marathons!

So my new goal is to become healthy again, first of all. After that I will watch out for a nice marathon. If this happens early enough for Frankfurt, that’s fine. Otherwise it probably will be an event in 2013, so I can recover and train sustainably over the winter months.

Here is the data I already had in the previous posts. No great news though: 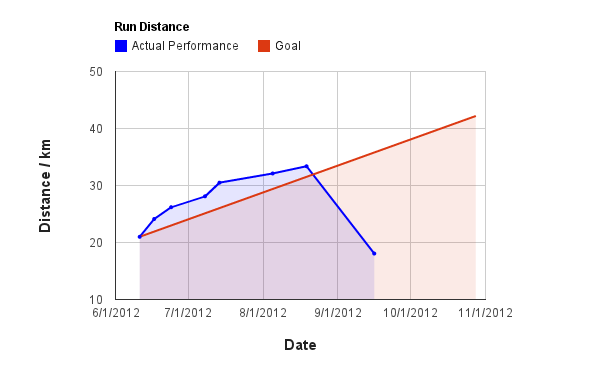 I was not able to do long runs anymore. One run over 18km, which was okay. Purposely I did not run a longer distance there to allow my legs to recover, which did not happen. Running something like 30km would not be possible at the moment. 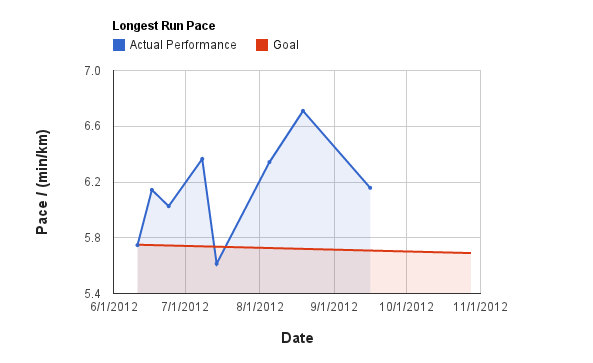 This does not tell us too much, as the last run is only around 18km. Still would have been to slow to finish a marathon in less than four hours. 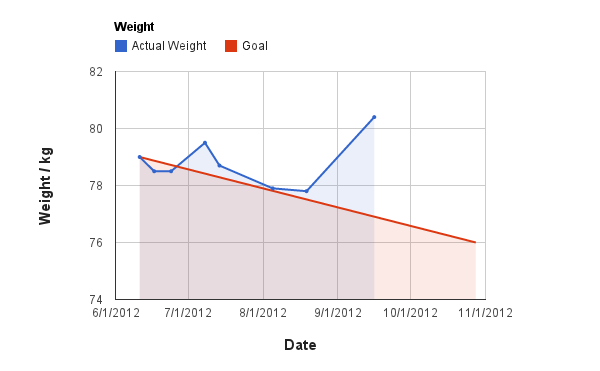 Reduced training and too much intake of sweets lead to predictable results here.

It may sound stupid, but I did realize a marathon is not a walk in the park. I expected it to be a mental challenge mostly but my body proofed the opposite. My initial training plan did not match my physical condition and thus was not sustainable and lead to injury.

From now on, I will be more cautious when raising training intensity and volume. Also I am quite aware now, how bad shin splints can become and will stop training immediately if they occur again.

Having learned these things I feel more prepared than ever to take the challenge of training for and running a marathon. This will be even more valuable for upcoming future goals: Let’s go Ultra! 🙂